Idiosyncratic drug-induced liver injury (DILI) is an acute adverse hepatic reaction that occurs in only a small proportion of individuals exposed to a drug. It is unexpected from the known pharmacological action of the agent, leading to illness, disability, hospitalization, including life threatening liver failure (10- 15%), need for liver transplantation and death. DILI manifests in a variety of clinical presentations with a 13–17% of cases remaining unresolved at 6 months, and 8% at 12-months follow-up leading to transplantation in 2–4% and in 6–8%. DILI represents a major challenge for clinicians, the pharmaceutical industry and regulatory agencies worldwide. DILI due to commonly used drugs continues to be an important clinical problem with a crude annual incidence of 19 per 100,000 individuals and 22% of the cases requiring hospitalization.

Burden of DILI: The concordance between hepatotoxicity in animal and humans is poor which means that adverse hepatic reactions account for attrition of a substantial proportion of drugs during drug development. Hepatotoxicity has been the second most common reason for withdrawal of drugs from the market worldwide accounting for 32% of such cases between 1975 and 2007. Current preclinical toxicological approaches are not able to predict these adverse events. Thus, DILI jeopardizes patients’ safety and poses significant economic burden on pharmaceutical companies

DILI is under-recognised with only 1 in 16 cases recorded by the spontaneous reporting system of pharmacovigilance; information when received is often inadequate for robust causality assessment. DILI occurs in association with a large number of drugs. The wide range of manifestation of DILI and the lack of specific diagnostic tests poses a challenge to clinicians in terms of diagnosis. There are currently no European clinical guidelines available on how to suspect and confirm the diagnosis of DILI or how to manage DILI once it has been diagnosed. There are no biomarkers that pre-empt DILI or detect DILI, therefore, we cannot effectively monitor patients on drug therapy and diagnose DILI early. A delay in detecting DILI and consequently prolonged exposure to the causative drug can increase the patient’s risk of experiencing severe or life-threatening outcomes. Failure to diagnose DILI accurately risks reexposure to the causative agent with consequent severe reaction. This puts the patient’s life at unnecessary risk, which could be avoided with a correct identification of the culprit drug (e.g. acute-on- chronic liver injury).

Like other forms of adverse drug reactions, DILI is a socio-economic burden because of its impact on healthcare costs and expenses related to social security, such as sickness benefit (the EU societal cost of ADRs is around €80 billion /year with an average of 2250 € for one ADR).

The main aim of the PRO-EURO-DILI-NET COST Action is to set up a European-wide interdisciplinary co-operative network of stakeholders in the DILI field (including scientists, clinicians, regulatory authorities, Small and Medium Enterprises (SMEs) and industry partners). Through workshops, scientific exchanges as well as training schools, this Action will coordinate the efforts aiming to advance our understanding of DILI as well as facilitate the translation of basic research and preclinical findings into clinical practice. 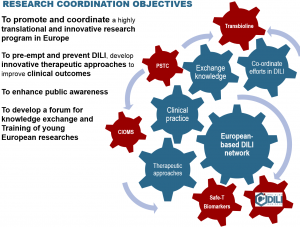 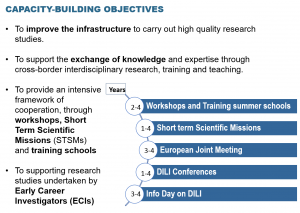 (a) Harmonize efforts for in-depth DILI phenotyping and bio-sample repository and coordinate pre-funded database/repository studies to aggregate a large number of DILI cases in a standardized manner (WG1);

This Action responds to COST Mission leading to new concepts and products, a consensus about how we can improve the knowledge about drug-induced liver injury (DILI) field through setting up a European-wide interdisciplinary co-operative network of stakeholders; contributing to strengthening European research and innovation capacities through network building itself and the participation of scientific, professional, regulatory agencies and the pharmaceutical industries in this Action (CHERRY BIOTHECH in France, METAHEPS GMBH in Germany, VLVBIO in Sweden and C4X DISCOVERY LTD in United Kingdom). 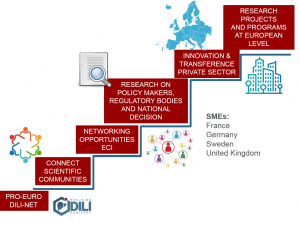 COST (European Cooperation in Science and Technology) is a funding organisation for research and innovation networks.

A COST Action is a science and technology network funded over a four-year duration which requires the participation of at least seven different COST Full Members or Cooperating Members). An Action is organised through a range of networking tools which are performed for the purpose of supporting and ultimately achieving research coordination and capacity building objectives as set out in each Action’s Memorandum of Understanding.

How to join us?

A simplified protocol, consent template and lab SOP have been prepared for the Pro Euro DILI study for groups that want to join in this project